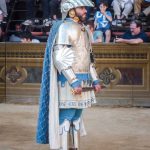 For the old Florentines, June may only mean one thing: Historical football!
As in many cities, even Florence was divided into districts and the historical ones that take part in this typical game are 4: Santa Croce (BLU), Santo Spirito (WHITE), Santa Maria Novella (RED), San giovanni (GREEN).
Piazza Santa Croce has always been the location where the matches are played.

The square is set up as it was when the game began: a dirty and dusty square where there were no stones. Obviously today the stands are arranged so that spectators can enjoy the show in a better way.

Historical football can be defined as a mix between football, rugby and wrestling .. with the players (calcianti) dressed in typical historical clothes.
The teams are made up of 27 players and both hands and feet can be used. The points are scored by pulling the ball to a designated place within the perimeter of the field, with another marked point running along its short sides. There is the main referee, 6 linesman and a field master. Each match lasts 50 minutes and the winning team will be the one with the most points, also called hunts, scored.

The first game is played in one of the first weekends in June, while the final is played on June 24, the day of the patron saint of Florence. The winning team wins a Chianina calf.
On the day of the final, you will see the windows of the districts, along the streets people dressed up with historical costumes and just before the game, a beautiful parade with flag-wavers.
Finally, attending one of these games means entering the true Florentine spirit: play, strength, sweat, speed, enthusiasm!