The Outbreak of the Float 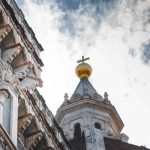 Every year in Florence, Easter Sunday is celebrated in a very special way …
Lo Scoppio del Carro (The outbreak of the float), a tradition that was born about 350 years ago.
The event consists of a cart full of fireworks pulled by six white oxen from Porta a Prato to Piazza del Duomo.
During the mass celebrated in the Cathedral, a dove-shaped rocket whizzes from the main altar along a cable to end up on the cart, beginning the explosion of fireworks.
The origins of this festival are to be found in the period of the first crusade, when Pazzino de ‘Pazzi, head of the Florentine contingent returning from the Crusades to Florence, was given the task of keeping the fire of the Holy Saturday lit, a honorary task that he turned into a real party setting up a ceremonial wagon to bring fire around the city.
All his descendants continued to organize the party up to the Pazzi conspiracy of 1478, from which only the city authorities took care of it.