THE LIONS IN FLORENCE 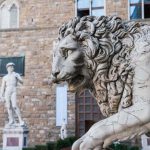 Everyone knows the famous ‘Florentine Lily’, but did you know that the lion is also a symbol of the city of Florence?

Undoubtedly the most famous is the lion, called ‘Marzocco’, by Donatello whose copy in Piazza della Signoria proudly protects the red lily, coat of arms of Florence.

The image of the lion was chosen by the Florentine Republic, to replace the imperial symbol eagle, to demonstrate its political supremacy.

The ‘symbol was born’ around 1280 when the Florentines wanted to place in Piazza San Giovanni a cage with a real lion to emphasize the independence of Florence.

As luck would have it, one day the beast escaped from its cage, spreading panic through the streets of the city.

He took a child in his flight but, to the utmost amazement, handed it back without a scratch to his mother and then led back, without resistance, into a cage.

From that moment in Florence the lion was guarded as a good fortune.